Russell T Davies has confirmed Martha’s presence in the second season of Torchwood in the latest issue of the Doctor Who magazine. Martha Jones’ creator, tells the magazine his plans for the character: “You have to protect the fact that she’s still a Doctor Who character. For example, there is no sex or swearing with her in Torchwood, cos there will be some kids watching. It’s fine for Gwen to be doing it, or for Owen to be doing it, it’s very rare for Tosh to be doing it… but literally we sit there with a script taking swearwords out of Martha’s lines sometimes. Exactly the same with Captain Jack – he never sewars in Torchwood.”

Toshiko is given an alien pendant which enables her to hear other people’s thoughts. As the rest of the Torchwood team puzzle over a centuries-old skeleton, the pendant forces Toshiko to question her commitment to Torchwood: is her new-found ability a blessing or a curse?

Concerned that the space-time rift is spreading, Torchwood investigates a series of gruesome deaths in the village of Brynblaidd in the picturesque Brecon Beacons. What sort of creature could cause such shocking injuries? Stranded without communications or equipment, and isolated from one another, the team confronts a terrifying enemy.

Supernatural forces stalk the suburbs of Cardiff: but are they friendly or malevolent? And what do they want with the seemingly normal Pierce family? As nightmares of his past haunt Jack, can Jack’s old friend Estelle Cole (Eve Pearce) help him prevent the tragedy brewing in a suburban household?

TV Week has published a full-page article for the next Torchwood episode, ‘Small Worlds’!

In the basement of the Torchwood building, Ianto Jones hides a terrible secret. As a Japanese doctor attempts to rescue the soul of a half-Cybernised woman a quiet day in Torchwood quickly becomes a living nightmare. Has Ianto unleashed a force that will destroy his colleagues?

If you haven’t already, we invite you to join the Torchwood Australia MySpace group!

Join in on MySpace only discussion on the group forum, as well as receive special bulletins with important TFCA news! 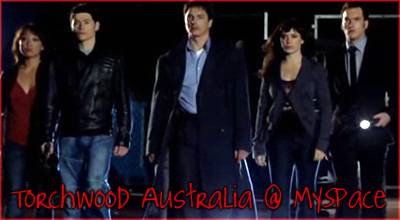 When Gwen retrieves an alien object from a fleeing hoodie, she’s haunted by a vision of a lonely young boy. As the team track down the object’s owner, the elusive Bernie Harris, Owen experiences an even more terrifying vision and a long buried crime resurfaces.